Date:
June 20, 2019
Press Release
Real Estate and Tax
The 2018 property tax rates, calculated by the Cook County Clerk for more than 1,400 taxing agencies, were released today. This is the final step in the process before property tax bills are mailed. Tax bill payments are due August 1, 2019. The full report can be found here.

"Calculating and publishing these tax rates is a massive effort towards transparency and fairness in taxation, and I want to commend the staff of the Clerk's Office and the municipal offices for working together and getting this part of the process done in an extremely efficient manner," said Karen A. Yarbrough, County Clerk.

Once again, the total property taxes billed for taxing districts in Cook County has broken previous records from $14.4 billion last year to exceeding $14.9 billion this year. As a result, it is expected that individual taxing districts may receive increased property tax revenues due to this 3.7% increase over last year.

Taxes for commercial properties across Cook County and the City of Chicago are also seeing changes this year.
Property Tax Changes for Commercial Properties by Region 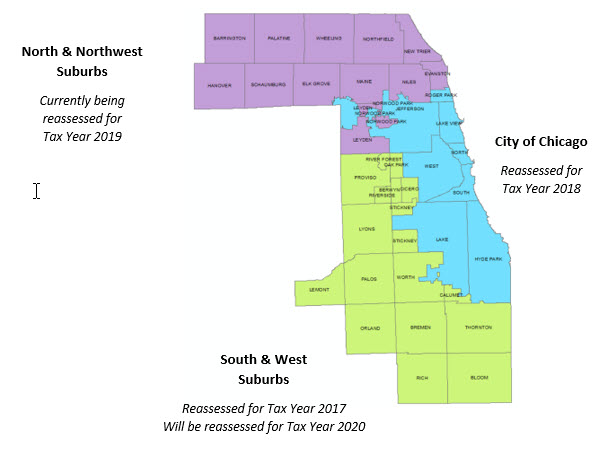 How Taxes and Tax Rates Are Calculated

There are a number of factors which impact whether or not individual property tax bills will increase or decrease. Among these factors, the three most impactful are:

A taxing district is a government body such as a school district, library or municipality which is authorized to receive funding from property taxes.  Each district in Cook County submits a property tax levy to the County Clerk each year.  Tax rates are calculated by dividing the funds each taxing district requests in their levy by the total taxable value (EAV) within each district. The tax rates of all districts that service a particular property are compiled to create the composite tax rate for that property.

The Illinois Property Tax Extension Limitation Law (PTELL), also known as the “Tax Cap Law,” was put in place in the mid-1990s to prevent districts from increasing their property tax revenues by more than the rate of inflation. This year, districts were limited to an increase of 2.1%. (the 2018 Consumer Price Index). However, PTELL does not apply to home rule districts, debt obligations, special purpose funds and value derived from new property or from terminated Tax Increment Financing Districts (TIFs).

Taxes billed in Cook County increased 3.7% for tax year 2018 compared to 2017.  See the chart below for a breakdown of tax increases by region.

Changes in Total 2018 Taxes Billed in Cook County by Region

Analysis of the City of Chicago

The total taxable value of property in the City of Chicago increased 12.5% for tax year 2018. Individual increases or decreases varied across City. Some areas experienced larger increases than others. 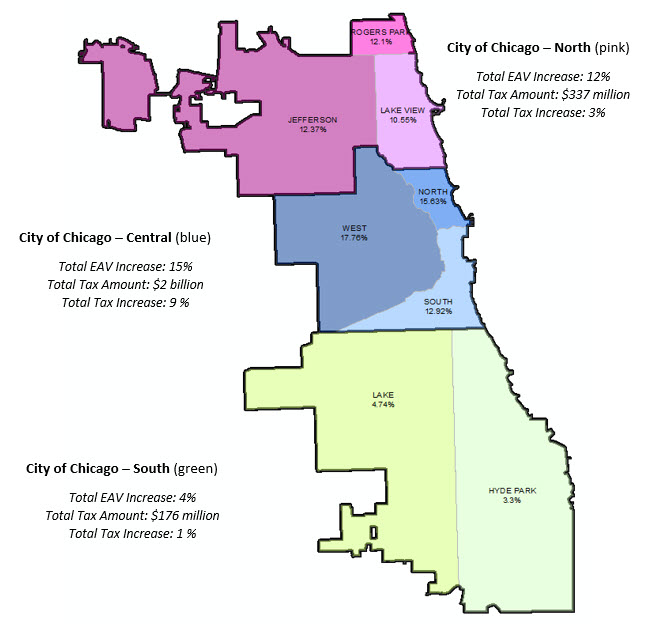 The reassessment of the City of Chicago resulted in an increase in assessed value (AV) of approximately 16.4%. This increase was offset by a 1.8% decrease in the state-issued equalization factor.

All property owners in the City of Chicago have the same tax rate with the exception of properties in special districts such as Special Service Areas, Home Equity Assurance Districts, Expanded Mental Health Services Districts and the South Cook Mosquito Abatement District. Properties in these special districts pay an additional amount of tax for these services. Because all properties in the City have the same tax rate, more or less, variability in Chicago tax bills is usually due to differences in taxable value (EAV). The general tax rate for the City of Chicago decreased 6.6% this year.

Whereas tax rates in the City of Chicago tend to be uniform, tax rates in suburban Cook County see much more variability.  This is due to the larger number of taxing districts in the suburbs.

The Southern and Western suburbs tend to have lower property values and thus higher tax rates, while the Northern and Northwestern suburbs tend to have higher property values and thus lower tax rates.  Both regions have higher rates than the City of Chicago which has the largest value base of the three Cook County assessment areas.

Similarly, there are six different elementary school districts in the Village of Skokie and taxpayers have rates that range between 8.305% and 12.443% largely dependent upon which school district they live within.  Each second installment tax bill will display the list of districts that contribute to a property’s final tax amount.