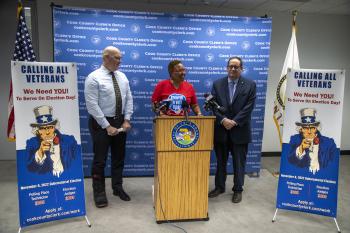 Facing a critical shortage of election poll workers, Cook County Clerk Karen A. Yarbrough announced Tuesday that her office is launching a campaign to recruit military veterans to serve as Election Judges in the upcoming November Gubernatorial Election.

The Clerk’s Office, which administers elections in suburban Cook County, has seen a decline of approximately 40 percent in the number of Election Judges over the past eight years. Approximately 4,350 individuals have signed up to serve as judges in the approaching Nov. 8 election, but Yarbrough said that her office ideally needs at least 7,000 judges to adequately cover each open position at polling locations.

Yarbrough attributes the decline to the pandemic as well as the fact that many long-term election judges are retiring due to age. She also noted that the current political atmosphere could also be contributing to the reluctance to serve.

“The pandemic has had a significant impact, but I also believe that the political climate in our country has been a factor,” said Yarbrough. “Our democracy has been under attack from lies and misinformation about the election process, which has caused fear and confusion for some voters.”

Yarbrough said her Veterans Service Office will work with partners at the Cook County Office of Veterans Affairs, veteran hospitals, the Honor Flight Chicago organization, and local community-based veterans’ organizations to spread the word on the call for service.

“Our veterans are a trusted and committed group who have already displayed their courage to serve our country in difficult times,” Yarbrough said. “They have the skills, the discipline, and the pride to serve and to help us shore up confidence in our electoral system.”

The Clerk’s Office has 1,439 precincts that will require staffing with poll workers throughout all communities in suburban Cook County. 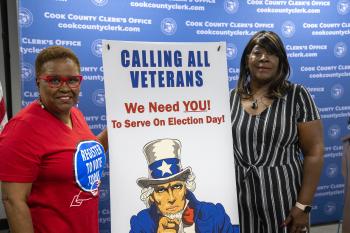 Election Judges are paid $200 and Polling Place Technicians $365, and the Clerk’s Office provides training for both positions. Election Judges must be a registered Cook County voter or an eligible college or high school student (16 or older). The Clerk’s Office has also recently initiated partnerships with several community colleges to help recruit college students to serve as judges.

The Clerk’s Office is also in need of bilingual Election Judges in many precincts with high concentrations of Spanish, Chinese, Hindi, Korean, Tagalog, Polish, Russian, Ukrainian, Gujarati, Urdu, and Arabic-speaking voters who are not proficient in English and may need special assistance at the polls.

To apply to work as an Election Judge or Polling Place Technician, visit cookcountyclerk.com/work.