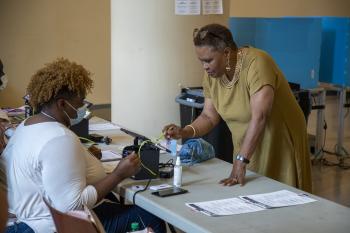 As expanded Early Voting gets underway in Cook County, the Clerk’s Office on Tuesday announced the opening of an Early Voting location for suburban voters at Chicago’s Union Station.

Clerk Karen Yarbrough also announced that her office has created a new “Trusted Source” webpage to combat harmful election misinformation and provide voters with detailed facts on all aspects of election operations.

The Cook County Clerk’s Office officially kicked off expanded Early Voting this week, opening more than 50 locations in the suburbs where voters can cast their ballots seven days a week leading up to Election Day on June 28. Voters can visit any of the locations to vote early, register to vote, or to drop off their Mail Ballot at a secure drop box.

Suburban commuters can take advantage of the Union Station Vote Center on their way in or out of Chicago to vote early, register to vote, or to drop off their Mail Ballot. The Union Station location will also be open for voting on Election Day, June 28 for all suburban Cook County voters.

“My Elections Team has been working diligently to deliver an election that is safe, secure, and one that offers voters the flexibility to choose a voting plan that works for them,” said Yarbrough. “If you are a suburban commuter who comes through Union Station on your trip to work, please take advantage of this convenient opportunity to cast your ballot.”

The Clerk’s Office has also sent all registered suburban voters a mailer that provides them with their Early Voting and Election Day voting locations. Voters can also locate their closest Early Voting location by visiting the Clerk’s website at cookcountyclerk.com/EarlyVoting.

“Right now, one of the greatest threats to the integrity of our elections is the tremendous amount of misinformation circulating on websites and online sources, which has caused fear and confusion for some voters,” said Yarbrough.

“As the election authority for suburban Cook County, nothing is as important as ensuring that voters have complete faith and confidence in the security of our elections and that the integrity of the process is staunchly defended and protected.”

The webpage is accessible through the Cook County Clerk’s general website at cookcountyclerk.com/TrustedSource.