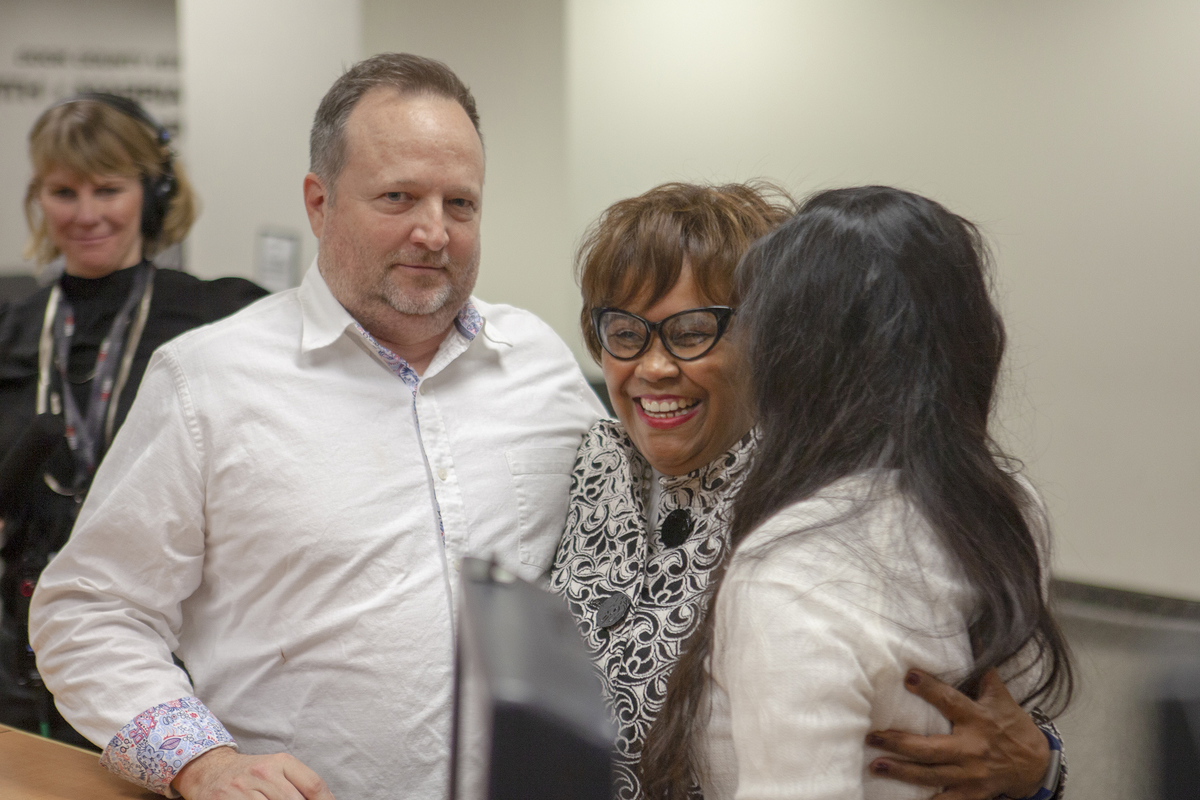 Kristina Skare and David Lakoskey have visited numerous destinations during their nine-and-a-half-year relationship, including most notably, all seven continents. However, on Wednesday, January 2, 2019, they added the Cook County Clerk’s office to that travel list, en route to becoming the first couple to be married in Cook County for 2019, which included several perks and benefits.

Skare, 42, and Lakoskey, 54, are residents of Chicago’s Lincoln Park neighborhood, and no strangers to ambitious travel plans, as the couple intends on visiting 100 countries and all 50 states. But prior to jet setting across the world and country, they elected to make the Cook County Clerk’s Bureau of Vital Records their first travel destination of 2019 in hopes of becoming the coveted “first marriage” of the year in Cook County.

The couple was married by the Honorable Karen A. Yarbrough, Cook County Clerk herself, in a Clerk’s Office tradition—which includes requesting a judge waive the one-day waiting period, so the Clerk can marry the couple immediately. Such a tradition is only available in Cook County, as by statute, the Clerk of Cook County, is the only county clerk in Illinois authorized to perform marriages by virtue of the elected position. Once the office opened at 8:30am, and the couple’s paperwork and marriage license were completed, Yarbrough officiated their ceremony before hosting the two for wedding cake and sparking white grape juice in her office at 69 West Washington, in Chicago, Illinois.

Although an age-old tradition for the Clerk’s Office, this was Yarbrough’s first time presiding over a marriage as the newly elected Clerk. “Marriage is a wonderful life event, that hopefully lasts forever, so to have the privilege of officiating Kristina and David’s marriage ceremony as the first couple to be married in 2019 was truly an honor” remarked Yarbrough following the ceremony.

While some couples obtain the prestigious honor of “first couple” married for the year through sheer happenstance, that was anything but the case for Skare and Lakoskey, despite only making the decision to marry less than two weeks ago, on Christmas Eve. After almost ten years together, the couple decided that Christmas Eve that “it was just time”, according to Lakoskey, and instantly began making arrangements shortly after deciding. 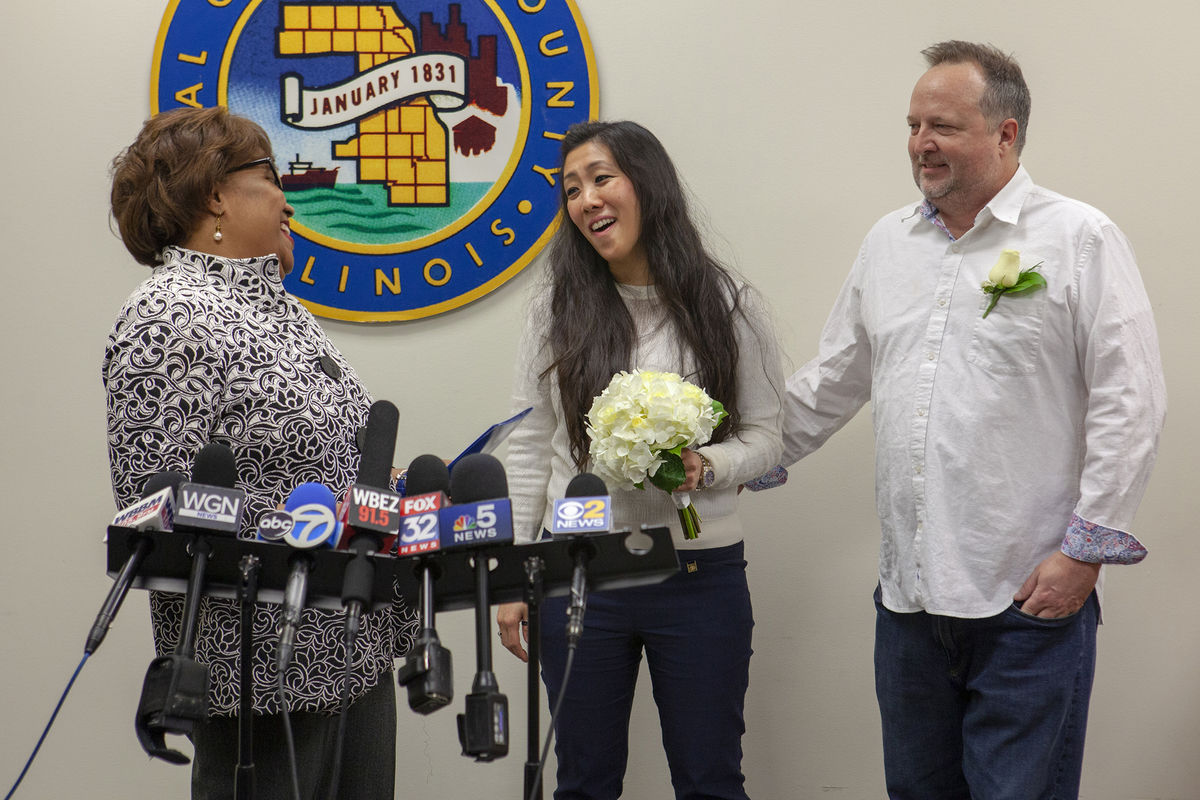 Kristina, the blushing bride, pointed out that her now husband, David, saw the “media coverage of the first marriage last year” and convinced her that they should strive to earn the title of first married for 2019. Although she had some initial reservations, once the two scouted out the location of the Vital Records office in the concourse level of the Daley Center, they both agreed to make a run at it, and arrived at 5:30am in hopes of being named the first married couple of 2019. “He had a very clear plan” acknowledged Kristina, of her then fiancé’s plan to be first. The plan paid off, as they were in line three and a half hours ahead of the next couple to apply for a marriage license at the downtown location.

While the couple had a very strategic plan to orchestrate their nuptials, their initial meeting was less coordinated. The two met on July 10, 2009, at Wrigley Field when the Chicago Cubs faced off against the St. Louis Cardinals. Kristina, a native of Dayton, Ohio, but a Cardinals fan due to having lived in St. Louis for a while, was the big winner that day, as her Cardinals bested David’s Chicago Cubs (as he’s a native Chicagoan). However, from that initial meeting, the couple’s relationship immediately “took off,” both literally and figuratively, as the two “love to travel” according to Kristina and have plans to travel to Thailand and Mynamar in the near future (although they are not calling it a honeymoon).

In addition to their love of travel, the two also admire one another’s capacity to care for their fellow human beings. When asked what they love most about one another, there was no shortage of praise by either. “I just like the fact that he is always looking out for other people” said Kristina of her new husband. “Kristina’s just the nicest person I’ve ever met” praised David of his recent bride, and also added that “she just cares about everybody.”

After declaring David and Kristina husband and wife, Clerk Yarbrough also presented the lucky couple with an array of gifts donated by several local businesses. The Cook County Clerk’s 2019 “first couple to be married” gift package included the following:

In addition to the several gracious and generous gifts of the above-referenced businesses, Clerk Yarbrough also waived the $60 marriage license fee, and provided the couple with a free Commemorative Certificate compliments of the Cook County Clerk’s Office.

To see the full video of Clerk Yarbrough officiating the first marriage of 2019, please visit the Clerk’s YouTube page.

Photos of the event can be found on the Clerk's Flickr page.